Today was a happy and busy day. Two competitions in the same day with the Swiss Cup the morning and then the Swiss Championship during the afternoon.

All went really good the morning. I won the Swiss Cup with only two points during the whole competition. The sections were really interesting with lots of precision in some place and power on other parts. Lucien Leiser is second and Loris Braun third.

The afternoon was the Swiss Championship. The sections were harder and this time was five sections with two laps.
Generally I made some really good moves and I know I’m progressing a lot. The bad thing is that i took two five in the same section because of a part I couldn’t manage to clean. It cost me a lot of points because of a bad appreciation from myself. But it was a really good fight with Loris Braun for the second place and liked it ! Lucien Leiser took the lead with his really good riding, Loris Braun is second and I took the third place.

Big thanks to VTTTT for the great comp, great sections with great people. Keep on rocking !
See you next week for the Swiss Championship, in 26 inch this time. 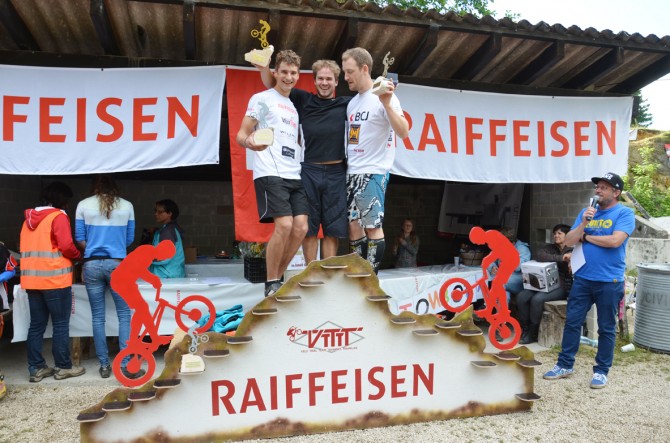 Looking at the sections under the rain 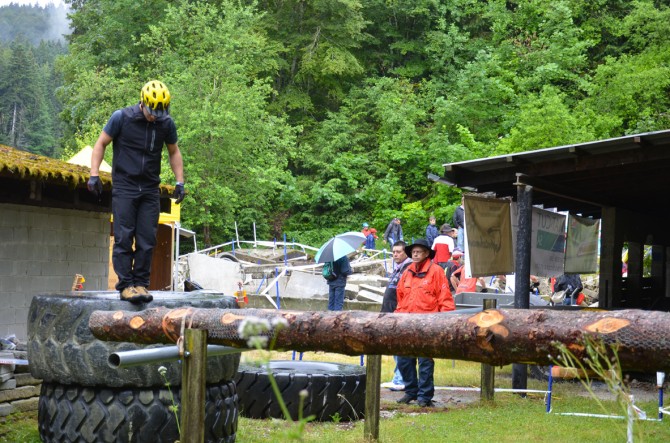 Morning. Riding with a really wet weather during the Swiss Cup. 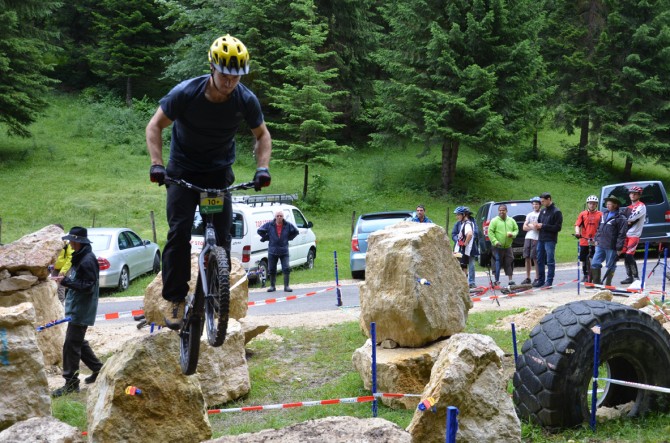 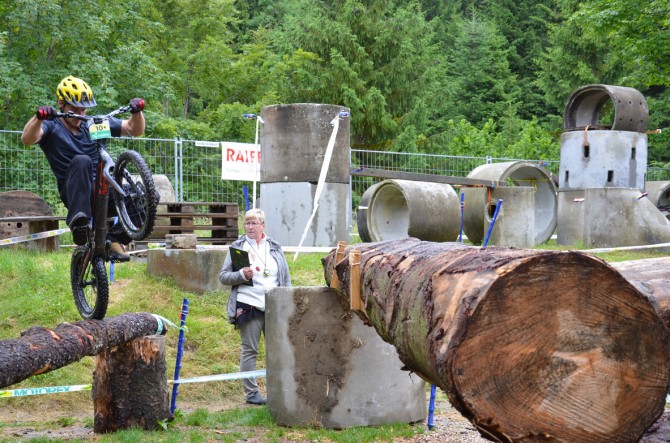 Fighting for the Swiss Championship the afternoon. 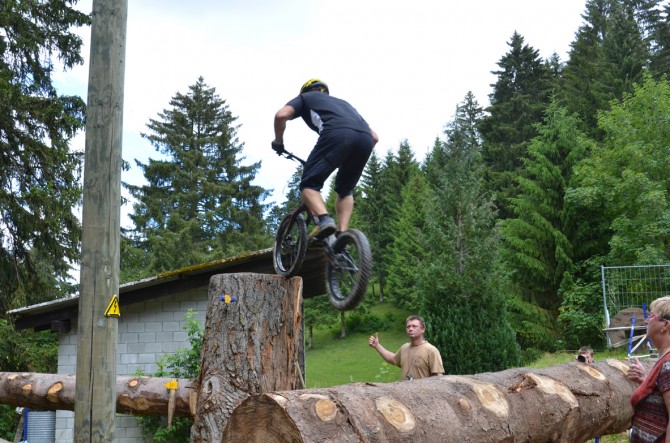 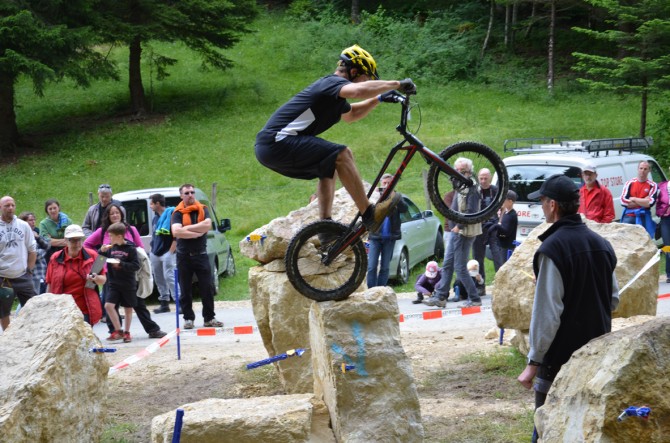 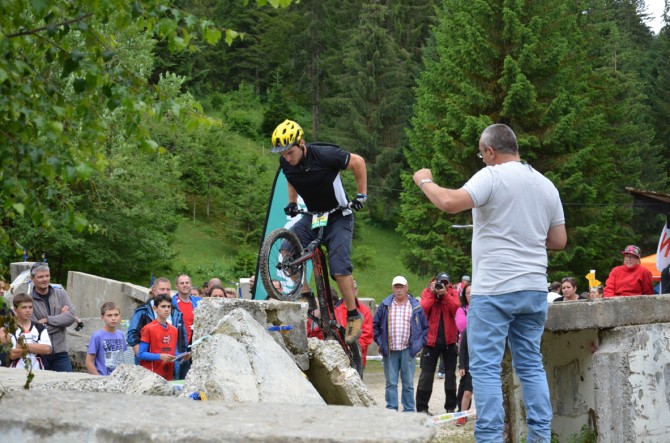 I’ve tried this big move twice but didn’t succeed unfortunately. So I just fell from this high to the ground.. 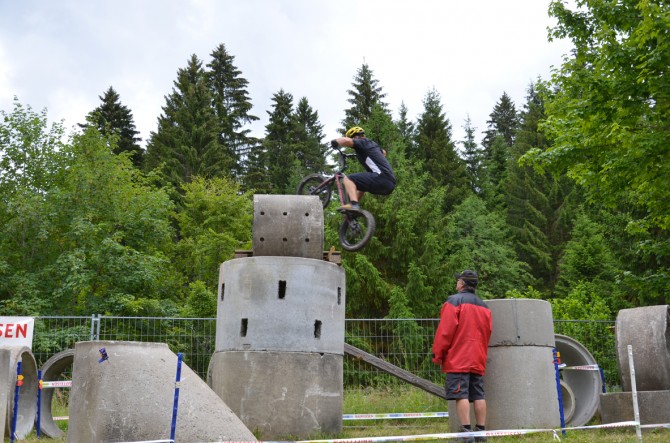 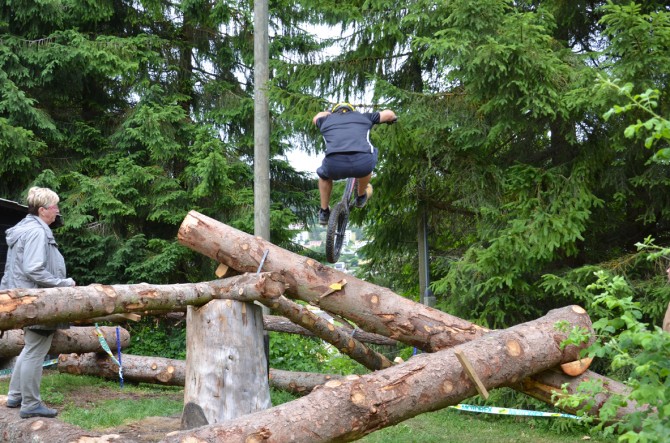 I was happy to win a watch with the first place during the Swiss Cup and a bronze medal for the Swiss Championship after a big fight. And last but not least, some sweeties.. 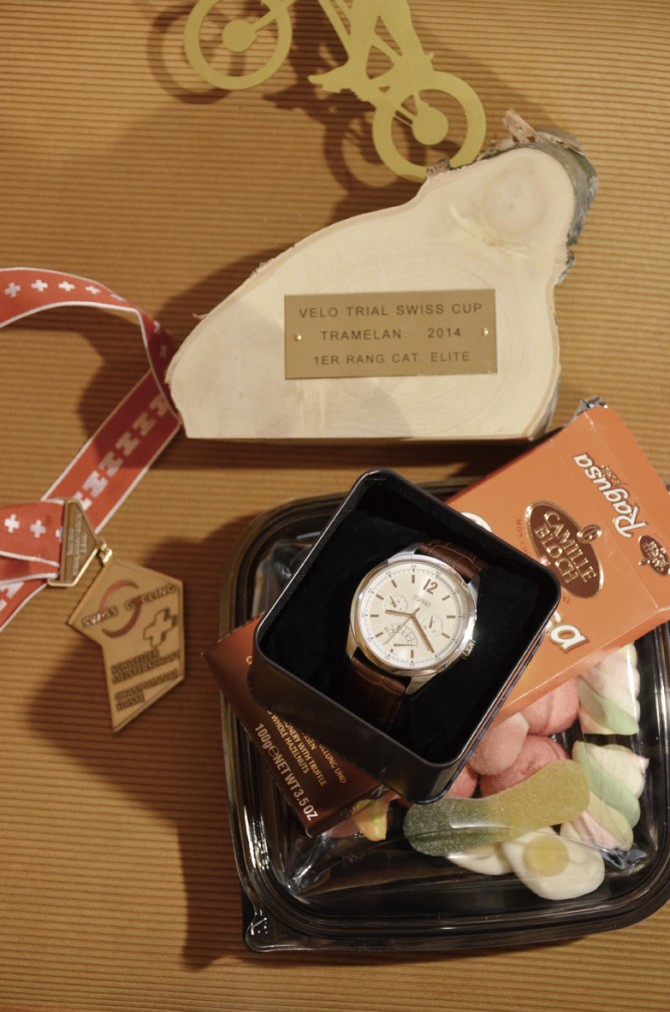 I’m happy to annonce that ADNV – an organization for local development including tourism, economy, and cities – will be my sponsor for 2014. 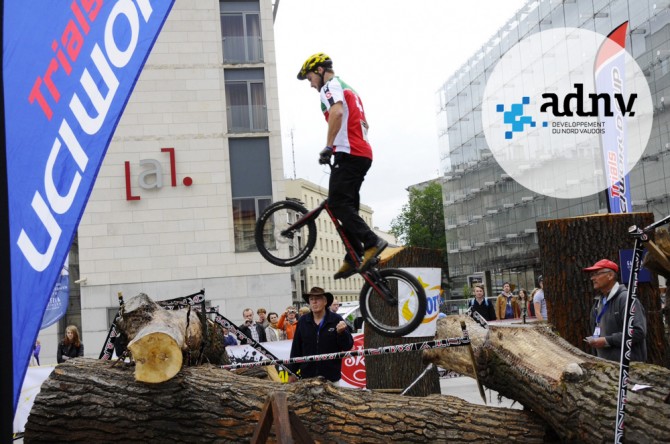 I took part in the UCI European Championship this week-end in Wałbrzych, Poland.

I started the trip on thursday evening with a meeting with the swiss team at 7p.m. in Solothurn to head straight to Poland with a long ride of about twelve hours to spend in the Swiss Cycling car. We arrived the morning after a random sleep to see the sections and register for the competition.

I started on saturday at 1p.m. I was directly in a good mindset even if I was tired of the long trip we had the day before. It went nicely and I suceed to clean some nice moves. I know I have to increase my power for bigger moves to get to the finals and I’m gonna work for it next week. But generally my level is good and I’m progressing every day. I finished at the 12th position and I’m pretty happy with. Like the earlier competitions of the year, I’m more motivated than ever to get better and better, so everything is positive !

The next big competition will be the Swiss Championship within two weeks, I’m looking forward to it. 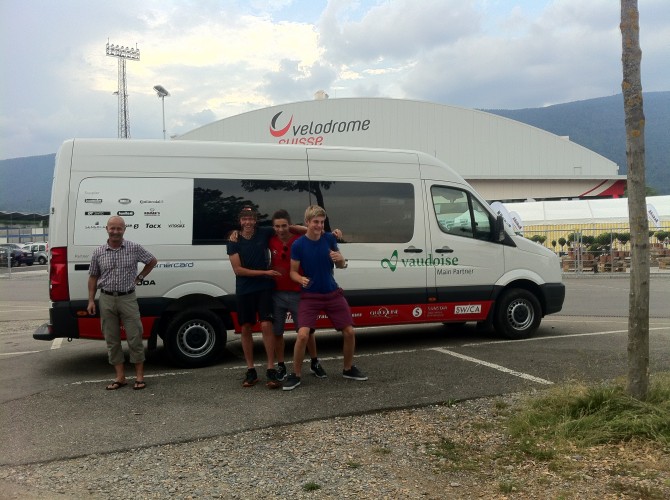 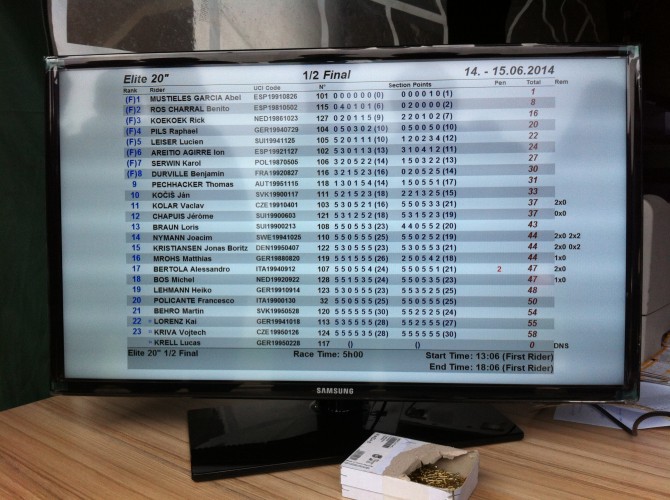 I took part in the first round of the UCI World Cup this week-end end in Krakow, Poland. My flight landed on wednesday evening and the competition started on friday with the quarter finals. All went pretty good and I ended the selections with only four points and good feeling on the bike.

On saturday afternoon the sections were modified for the semi-finals. I felt in really good shape with my training, bike and mentally prepared. I did a difficult first round with 18 points, struggling on some really big moves but improve a lot the second lap with only 8 points. I had a really nice riding with a strong will to get better in the sections and a positive mind.

With loads of new and really powerful riders, I ended up with the 17th place. I know I can go bigger and I’m happy with this first World Cup of the season.

See you next week-end with the swiss training camp and in two weeks with the European Championship. 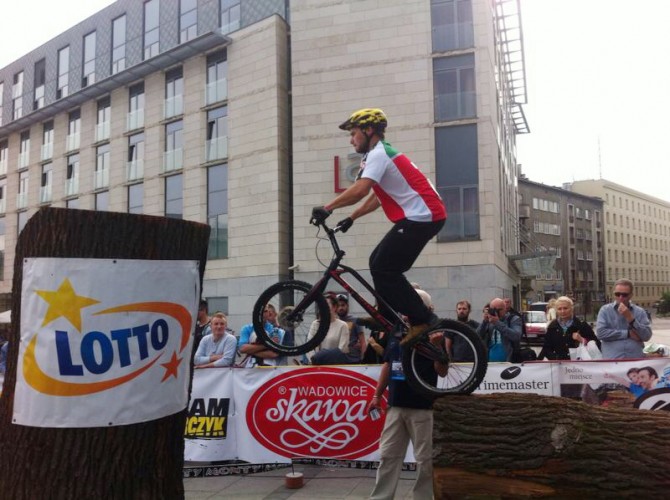 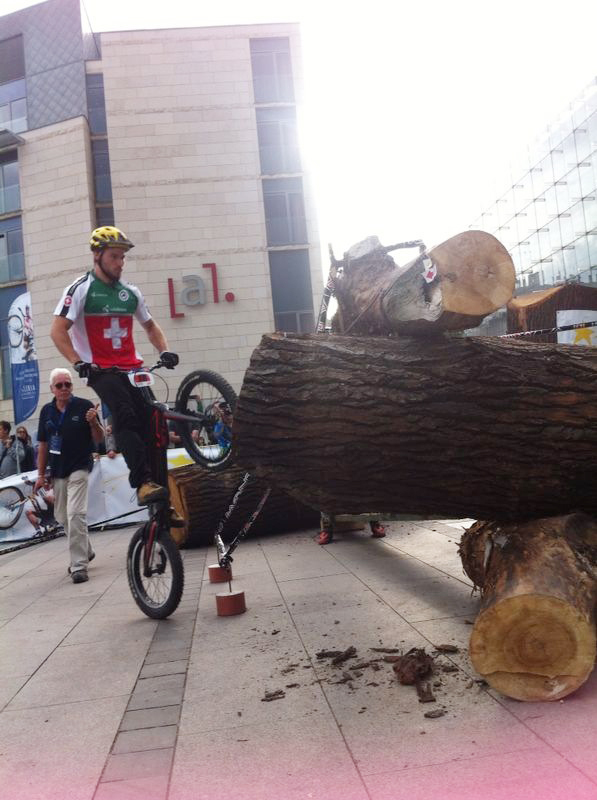 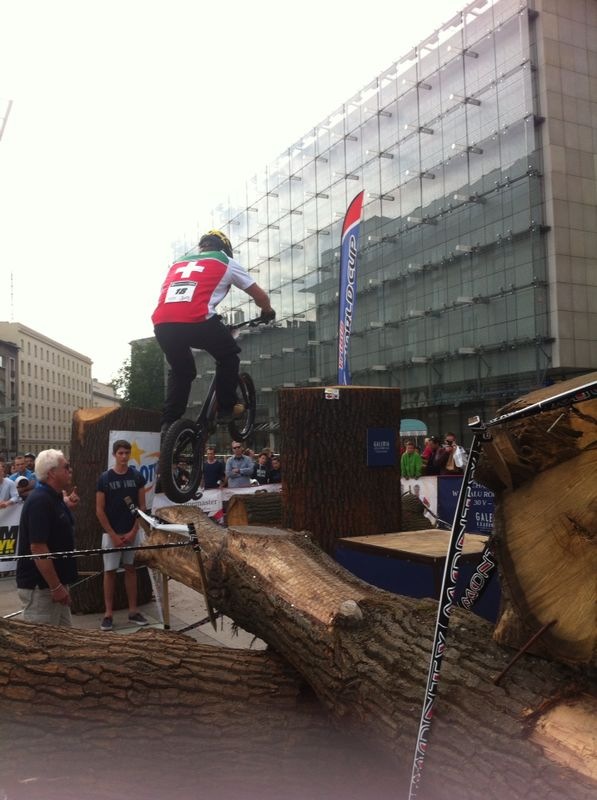